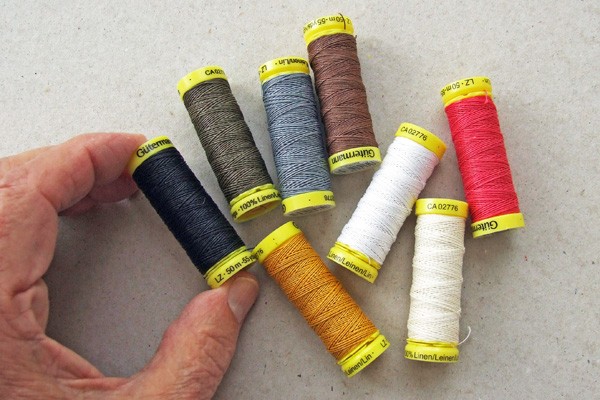 Threads, chosen for their suitability for bookbinding and similar crafts.

Traditional bookbinders use linen thread, although there are many modern products that are just as suitable. We stock all the common thicknesses of linen thread, mainly in natural colours. The German Gütermann range has useful packaging since it is spooled such that it will ship at the Large Letter rate (Larger spools, even with the same length of thread, have to post as a Small Parcel). It is also available in eight different colours. To avoid duplication their natural, unwaxed, and white, are not listed amongst the "natural" listings.

Gütermann is often written in English texts as Gutermann, or to follow the German pronunciation without using the umlaut, Guertermann.

One of the features of linen threads is the occasional, very infrequent, blemish. This is often seen as a characteristic of linen fabrics. It appears in the yarn as a slight bump. It is not a fault. If this is objectionable to you will need to snip out and discard the offending length of linen thread, or buy a polyester thread. We do not make any allowance for this, since it is a normal, if rare, feature that we expect knowledegable buyers to accept.

Some linen threads are sold ready-waxed. For stockholding purposes we prefer to sell unwaxed thread because it is so easy to wax it yourself, if required. It is not possible to de-wax it. We sellbeeswax as well, and a small lump of it will last a lifetime. More information on this is available at busybusy.co